Symptoms of diabetes in women 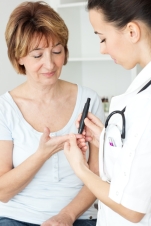 Diabetes is one of the most dangerous diseases. According to the statistics of mortality, the disease concedes only of Oncology and cardiovascular diseases. At the same time the number of cases is growing every year. More than half of people with diabetes – women. A probability of occurrence of diabetes in women is twice higher than in men.

What are the reasons? One of the most common causes of diabetes in women is the excessive weight. Due to the hormonal features of the organism, women have a greater tendency to gain weight, and it usually becomes the cause of diabetes.Unfortunately, diabetes is incurable and life-threatening disease. This is due to its complications (acute, which precipitously developing, late complications, which appear gradually over several years), which lead to fatal if not promptly begin treatment. Therefore it is very important to diagnose diabetes in its early stages, in time to start treatment, and slow the progression of the disease.

Symptoms of diabetes in women